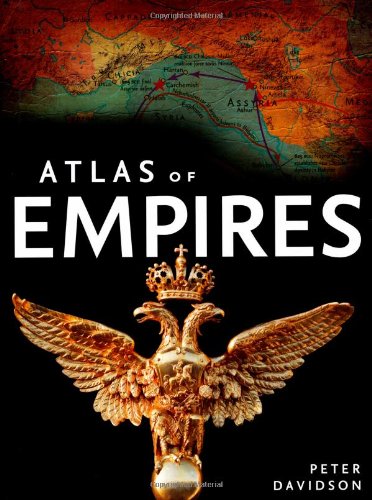 Peter Davidson’s Atlas of Empires is a very accessible and informative history of all of the world’s major empires, describing the reasons for their rise and decline. Most history books focus on great leaders, battles won, lands conquered, and economies exploited when summarizing the history of an empire.While these are important aspects of empire-building, Peter Davidson uses a different lens to look at empires, as he explains in his introduction:This book, then, defines empire as an unequal relationship between a core state and a periphery of one or more states controlled from the core. To explain how empires have risen, persisted and fallen over the millennia, the core, the periphery and the international situation each need to be examined.The core state is the place to look to find various motives for expansion, from the dream of imposing an imperial peace on squabbling states to the desire for economic exploitation, lust for the glory of conquest or zeal for evangelism, religious or ideological.The periphery is the place to look for crucial resistance or collaboration. Specifically, the fates of many empires have hinged on peripheral leaders deciding where their best interests lay. Often, the core can provide an account of an empire’s rise, while the periphery better explains its persistence.CONTENTOver the 240 pages of his book, he examines the rise, development, and fall of all the major empires of the world, from the first empires of Sumer and Akkad to modern “empires” such as the European Union.In his text Peter Davidson examines each empire, its people, and the ideas that it stood for. In most of his descriptions of empires, he highlights what one empire learned from its predecessors, how it legitimized itself, why it worked for a while, and how it came to fall.A HISTORY WITH MAPSThe text rarely describes campaigns at great detail: Here the maps are left to tell the story. Created by Peter Gwyer and Kate Parker of the mapping company Lovell Johns, the maps in this book not only illustrate what is described in the text in a highly legible way, but also add information to each chapter. While the article on Alexander the Great, for example, does not explain at great length the route that he took and the battles that he fought, a double-page map details in great detail.While the book’s title might suggest that it consists mainly of large full-page maps and some text, it is rather the opposite: There are several full-page and double-page maps, but the book is more of a history of empires that is illustrated with many detailed maps. Most chapters are round 6 pages long, contain one or two maps, as well as several smaller photos. The maps complete the historical explanations in this book.TARGET GROUPThe book is clearly aimed at students, history enthusiasts, and the general public. It is not an academic book for historians or advanced students of history, unless used as teaching material.Peter Davidson’s writing really stands out in its ability to explain the complex histories of empires in a very easy and understandable way. It is rare to read a history of hundreds of years within only a few pages while gaining a true insight into what happened, why it happened, and how it relates to other historical events. Even people with no historical background on any of these empires will grasp an understanding of this empire’s history, within its wider historical context.This comes at a price: In order to be easily comprehensible, the book does not discuss unclear points, controversies, or unknowns in the empires’ histories. Each chapter presents the history of each empire as a coherent story, in simple sentences and without any question marks. There are no footnotes and there is no bibliography, apart from a “further reading” section at the back of the book with three or four books recommended for each chapter.CONCLUSIONThis book appears to have been written in the same spirit that Ancient History Encyclopedia has been created: Make history accessible and understandable, using every tool possible. The book’s easy-to-read texts and high-detail maps achieve just that — a book that anyone can pick up and learn a good deal about the world’s great empires.The Atlas of Empires and its 240 pages manage to convey a stunning amount of information, covering over 4000 years of history. Especially teachers may find this book suitable as high-quality teaching material, often surpassing the summaries of empires find in high school textbooks.I highly recommend this book for anyone who wishes to have an overview of the empires of the world.