When I was planning my archaeological trip to Sardinia I discovered, thanks to vici.org (an Archaeological Atlas of Antiquity I have mentioned here before), that there were many Roman bridges still standing all across the country. Some are left abandoned and almost completely covered with vegetation but others are perfectly preserved. Ancient Roman bridges are an exceptional feat of Roman construction and, as I said before, I hold a certain fascination for these impressive ancient structures. I previously wrote about the Roman bridges I saw in Portugal here and in Southern France here. 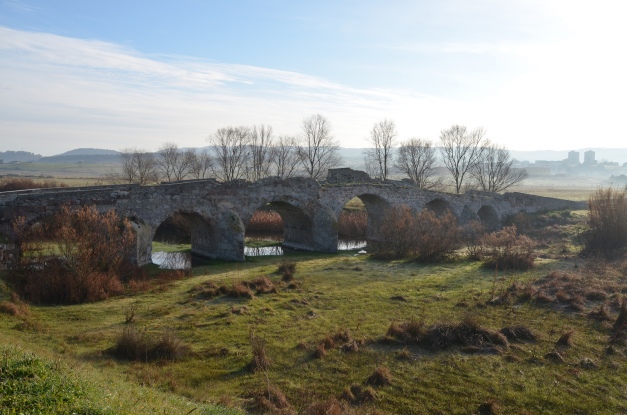 Roman bridge Ozieri, dating to the 2nd century AD and restored in the 3rd4th century AD. It has six arcades for a total length of 87.50 metres (287 ft), Sardinia Carole Raddato CC BY-SA

When the Romans began their conquest of Sardinia in 238 BC, there was already a road network built by the Punic who had inhabited the island since around 550 BC. However the Punic road network was only linking the coastal towns, leaving out the interior of the island completely. The Romans built four major roads (viae principales): two along the coasts and two inland, all with north-south direction. The road network, initially built for military reasons, was then maintained and restored continuously for economic reasons. 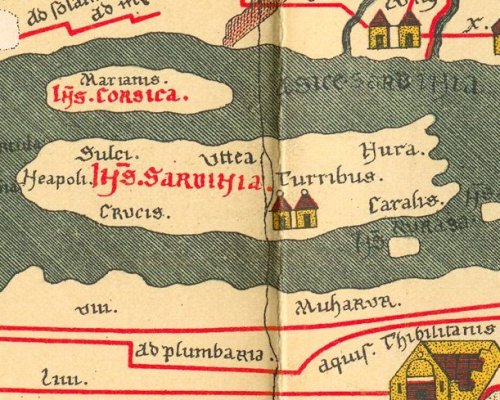 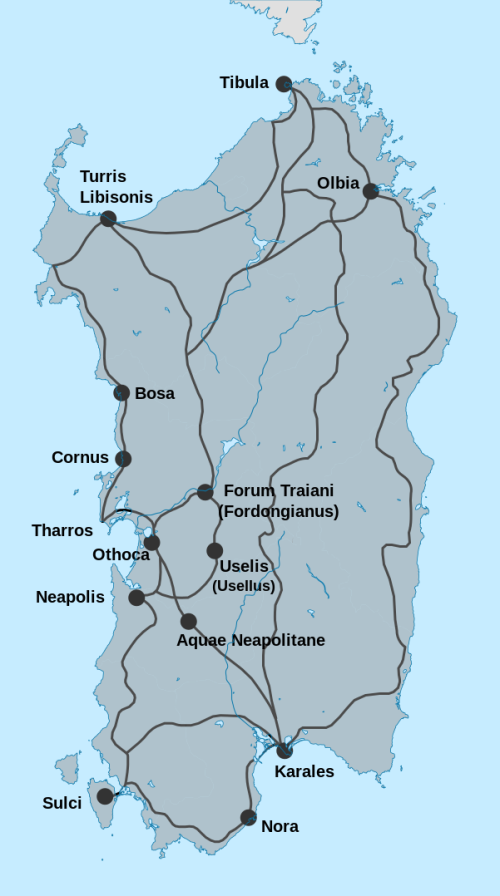 The main cities and roads of Sardinia in Roman times Wikipedia CC BY-SA 3.0

The most western road ran the entire west coast of Sardinia and linked Turris Libisonis (Porto-Torres) to Sulcis (Sant’Antioco) through Bosa, Cornus, Othoca (Santa Giusta) and Neapolis. The most eastern road followed the entire east coast from Tibula to Carales (Cagliari). Inland, two parallel roads ran from Olbia to Caralis through the region of the Barbagia (a land of barbarians) and from Tibulas to Caralis, passing first through Turris Libisonis (Porto Torres), and then through Forum Traiani(Fordongianus) and Othoca right down to Caralis (Cagliari). Other important roads that have been identified ran east-west (viae transversae), like the roads connecting Sulcis with Caralis, another connecting Othoca with Forum Traiani. This communication system was very efficient and created favorable conditions for the Roman cultural penetration among local populations.

Of the numerous Roman bridges in Sardinia, the most outstanding is the one in Ozieri, a 89 meter long bridge spanning the Rio Mannu alongside the road that connected Olbia to Caralis.

Known locally as “Pont’Ezzu” (Old Bridge), this bridge is a remarkable example of monumental architecture and is one of the largest and best preserved Roman bridge on the island. It dates to the 2nd century AD and was restored in the 3rd–4th century AD. It had six arches decreasing from the center to the sides and was still in used until the 1950’s. (Source) 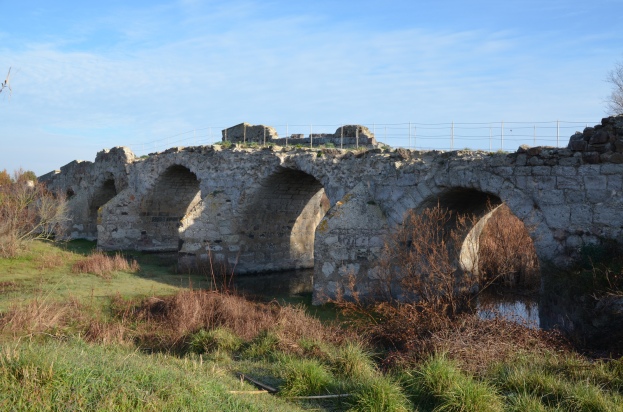 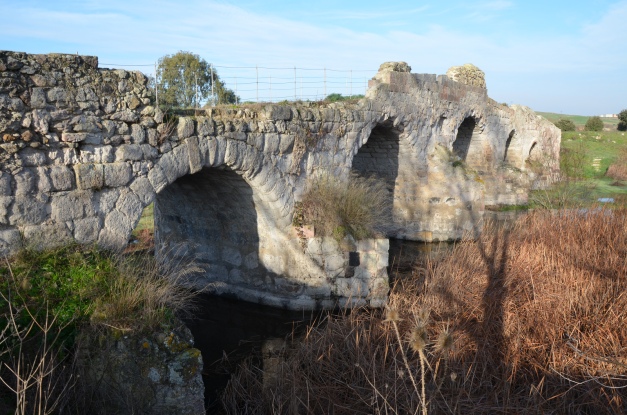 Another impressive example of Roman engineering is the Roman bridge at Porto Torres. Two thousand years of traffic have crossed the seven arches of the bridge over the Rio Mannu of Porto Torres as it was still in use up to the 1980s. 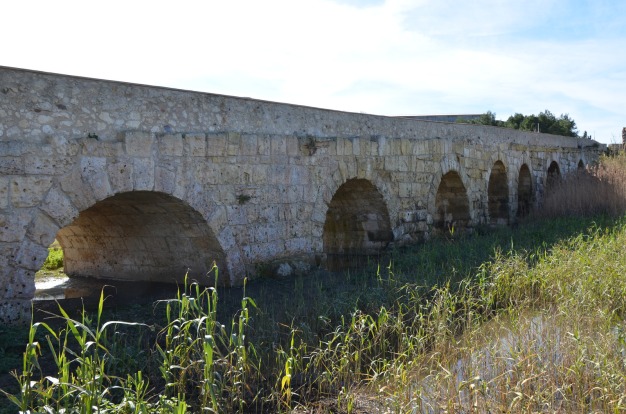 The bridge at Porto Torres stretches for 135 m from east to west and is 8 m wide. It was built after the foundation of Turris Libisonis in the first century AD to link the city to the silver mines and grain fields of Nurra (Sardinia was important to the Roman grain supply as mosaics from Ostia attest). The 135m long bridge slopes sharply, due to the different heights of the river banks. On the east side of the bridge you can still see a part of the original road surface. 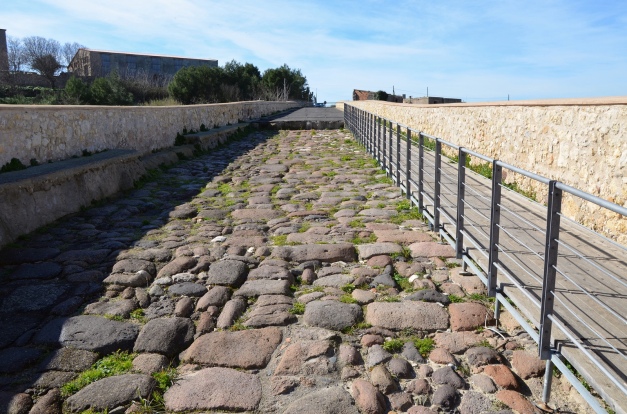 The bridge was built in opus quadratum with blocks of local limestone and slabs of thachyte that preserved the piers equipped with buttresses for regulating water flows. (Source) 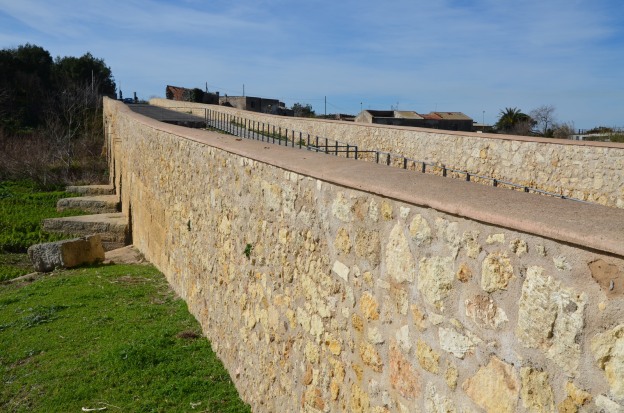 In the region of Mores, the remnants of the Roman bridge Pont’Ezzu bear witness to the importance of the territory as a major crossroads. During the Roman period the area was particularly densely-inhabited and Hafa (modern-day Mores) was an important centre, especially thanks to the dense communication network that passed through the area, like the north-south road that linked Olbia and Turris Libisonis to Caralis. The two surviving arches of Pont’Ezzu date back to the first century AD. 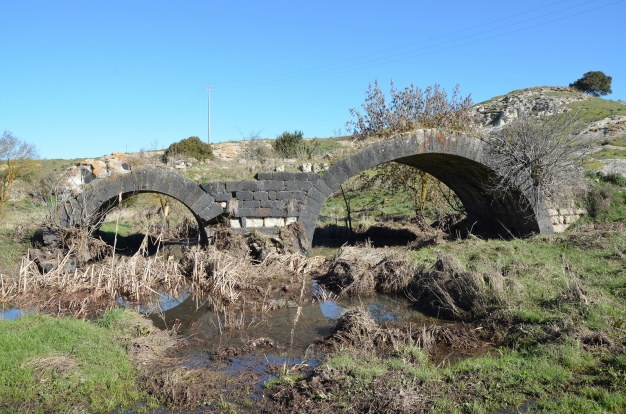 In the small farming community of Allai, once at a crossing point between Forum Traiani and the interior of the island, lays another Roman bridge built in local red trachyte stone and dating back to the 1st century AD. 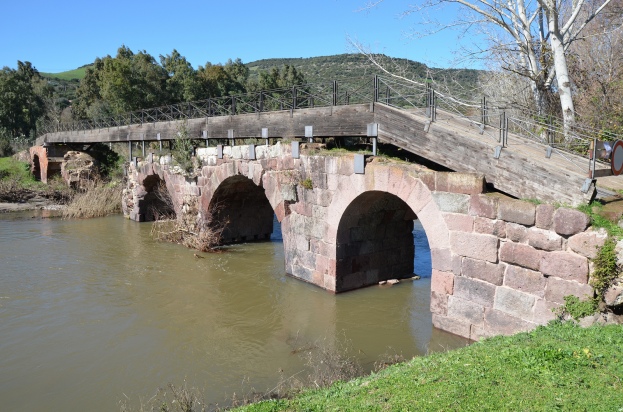 Spanning the river Flumineddu, this Roman bridge with seven arches was restored and enlarged in 1157 during the period of the Giudicati. The first structure presumably had only four arches. 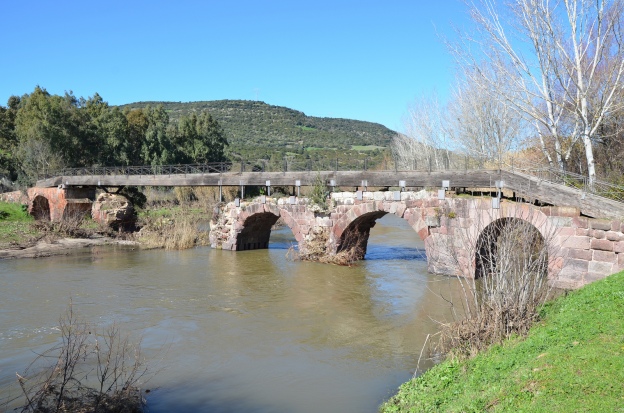 Another Roman bridge is located the suburbs of Usellus in the interior of Sardinia. It spanned a stream close to the colony of Uselis, a city founded in the late-Republican period and raised to a colony in the Imperial Age with the name of “Iulia Augusta Uselis” as recorded by the geographer Ptolemy. 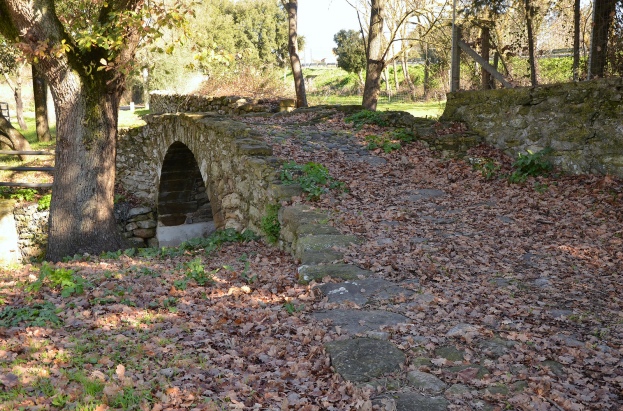 The Roman bridge on the island of Sant’Antioco, known as “Pontimannu”(big bridge) is unique on the island. It allowed the ancient centre of Sulci to be connected to the mainland. 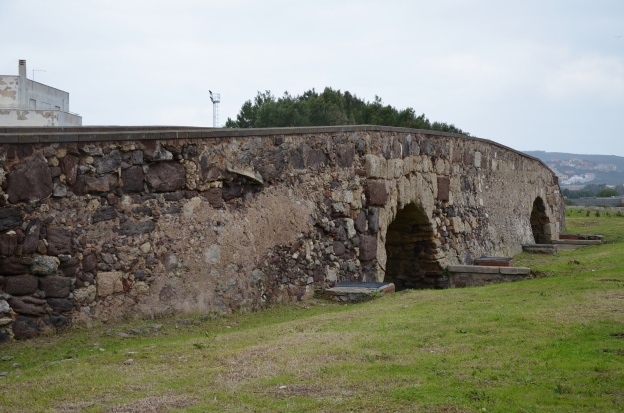 The city of Sant’Antioco was founded in the 8th century BC by the Phoenicians and later flourished as a Carthaginian colony to become one of the most considerable cities of Sardinia. There are numerous archeological sites in Sant’Antioco such as a Tophet necropolis where inhabitants from the Phoenician and Punic centres of the western Mediterranean laid their born dead infants  and those that died right after birth. Due to its strategic position, Sulci underwent noteworthy developments during the Roman Republic era when the execution of important works was carried out. 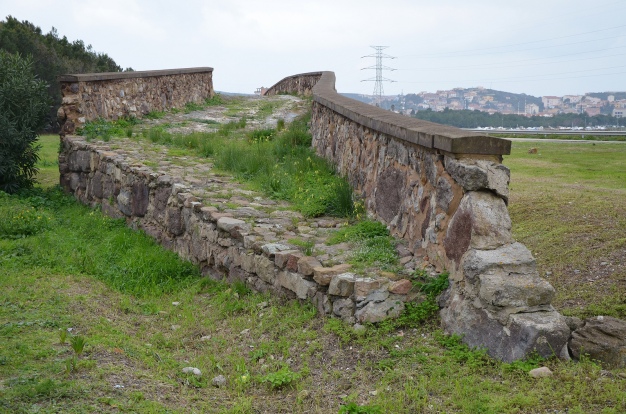 The bridge is 120 m long and about 5.5 m wide with two barrel-vaulted arches about 5.0 m large made of square blocks of sandstone. It undergone numerous and substantial restoration up until the 18th century. (Source) 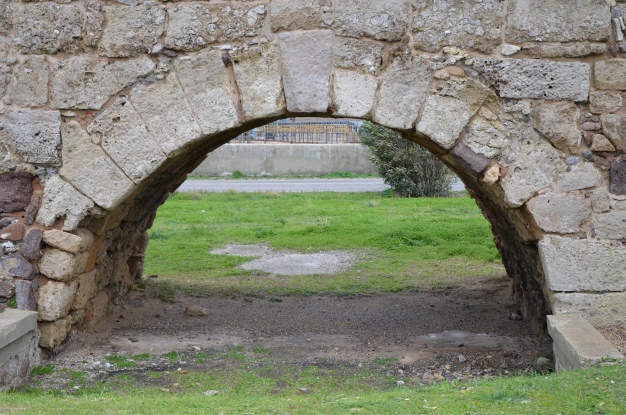 There are a few more Roman bridges to be found on the island. Here are photos of three  bridges I was able to see and another two that I sadly missed. 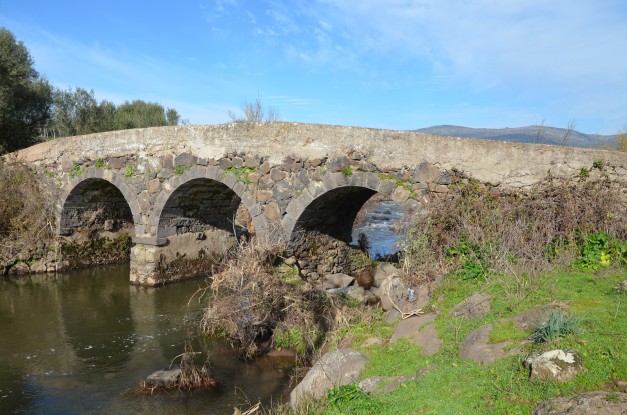 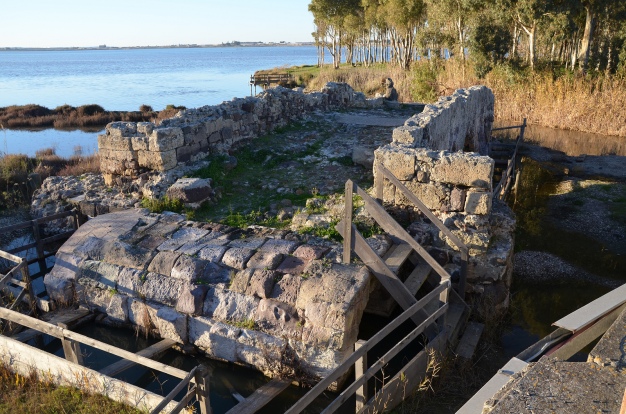 Remains of the roman bridge at Santa Giusta on the road from Othoca to Carales, Sardinia Carole Raddato CC BY-SA 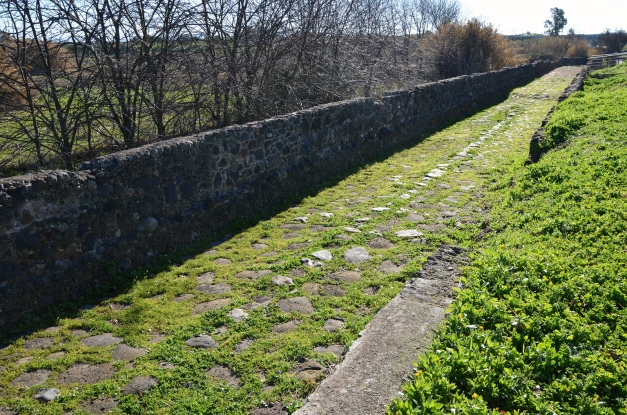 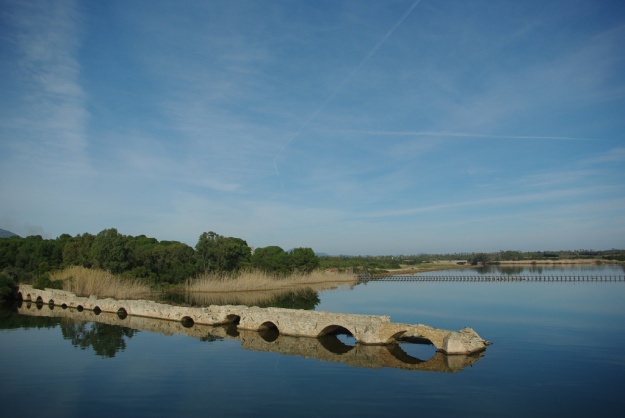